Our Lairds, Past & Present

We used to be a rowdy bunch.  Those guys to the right are our founders who decided that an all-male Scottish-preservation-and-fun-loving drinking club was a good idea.  (And God bless them for that!)  They first met in December 1966 and incorporated in March 1967.  In 2002 HSHC became among the first (and progressive!) highland societies to welcome women as full members, meaning they could attend meetings, vote, and serve on the board as Society Secretary.  Our first female member was Mary Jo Ann Carroll, who always had a good joke or riddle for the joke contest.  In 2016 we broke the glass ceiling by electing SJ Anderson as our first female Second Laird and in 2018 as our first female Laird.  (We came a long way, baby.)

The Highland Society of Harford County is for the preservation of the spirit, dress, music, and antiquities of the Scottish people and is dedicated to the promotion of those traditions among those of Scottish ancestry within Harford County, Maryland, and its environs.

We had an annual new-member ceremony for initiating prospective members into the Society and it was quite an event with a darkened room at the Blue Bell Restaurant in Fallston (one of our first homes), the bagpipes playing, lots of claymores and of course the Loch Ness monster was there along with many drams of single malt. It was a grand event.  The Gordon, aka Stockton Todd Holden and then Frank 'FowlAire' Fowler, had the large Claymore...huge thing...and would launch it into the ceiling tiles during the ceremony of initiation where it would swing like a pendulum on a clock and it never fell out...our  waitress for all these events was Ginny, a little woman, and she would have the tables arranged so if it was initiation night, we could use  the same spot in the ceiling.  Each member would stare at it and hope it stayed put.

Susan Avery had a Topless Go-Go joint in Aberdeen (the building is still there but she isn’t) and one month we decided that we’d rent the whole facility and have our monthly meetings there. As you can imagine we had many, many new faces present and many of them became new members of the society.

Since Susan's was BYOB, we would have our ‘dinner’ at the  famed Flying Clipper,  just down the road  from Susan's ; great food, and a treat for all of us; these evenings were well attended.

... we can’t forget the Pitlochry Rowdies: this was a group of members that broke away from the Highland Society at a time when the Society was becoming more civilized and these ‘rowdies’ wanted to continue on with the good ole glory days of the Society.

Boy do we have history! 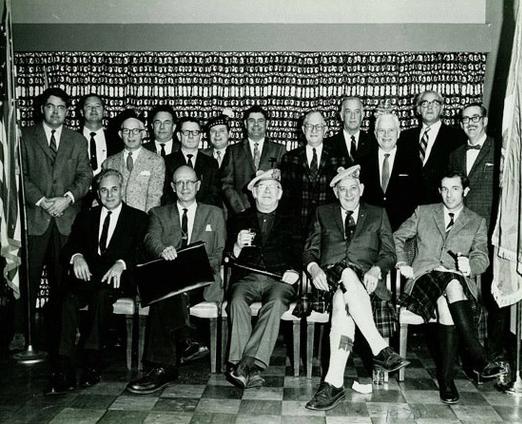 You saw it on our home page and might have wondered what it means.  Well....

The seal was designed by our member, George L. Van Bibber, seated second from the left in the photo.

The Seal of the Society is portrayed as a walking plow over a shield on which is the European Thistle on a field of gold and blue bends and pales. The Shield is enclosed within two circles, the inner gold and the outer blue. Within the circles appears the name of the society. The numerals 1967 signify the year of incorporation. The Motto Fellowship- Warmth- Good Cheer exemplifies the society itself.

The plow identifies the society as being located in an agricultural area. It reminds us that all Scots must drive a plowshare of thought through the heavy ground of ignorance.

The gold and blue circles represent the richness of the soil under the clear blue of the sky. The bends and pales represent the farms, gold, of the county and the three streams, the blue, that run within the county: Deer Creek, Bynum Run and Winters Run.